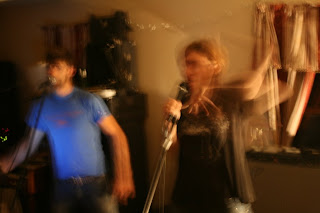 1. Yes indeed, we have neglected the Internet kingdom. for some reason or another, our last adventures took place in areas deprived of the simple pleasures of the world wide web. but now we're back and in Providence RI, where the weather is clear after yesterday's thunder storm.
2. We know we should post something about the shows. We're working on it together since writing about music and this sort of experience is somehow difficult for us. our backstage monologues will soon find their way to the blog.
3. A bad word about Boston: we were put down by the constant rain and fog that cradled the city from the moment we've arrived till the moment we left. Amanda was good to us, but Boston seemed to keep laughing at our faces and peeing on our heads, forcing us into Starbucks against our will and allowing our first bad show to take place.
4. A good word about Boston: we went whale watching. After sailing into the ocean for an hour and a half we ended up seeing three of the most amazing animals on earth: two fully grown whales and one baby whale. The latter instantly became the ship's favorite by providing all the goods one wet human can wish for: flapping his fins, rolling around and jumping in the air. We even managed to see his rock like head sticking out the water and looking straight at us tiny foggy humans.
5. Southington, CT: Don't go there. really. But if you do, please stop in the New Hawaii. These guys make fantastic house shows to a great crowd. Special thanks to Florida= death and to migs, who sacrificed his sanctuary bedroom for us out-of-towners.

(tom says)
About shows:
We've been performing. Playing in all sorts of places with all sorts of different people. Its been a magical pleasure to see the great diversity that exists between all the neighborhoods, tied together in this crazy love for music. We've had shows for 3 people including the bartender, and we've had shows for 200 people dancing and jumping and loving our sound. there's been dark lit holes in walls, and massive stage bars where shows don't start until past midnight. there's been more local beers each with its own secret taste, and no wine. 4 bands in an evening, from all corners of this nation, and beyond. punk followed by accordion, folk together with hip-hop. everyone searching. something like a shadow and that all undulating bodies pulsing in way that goes beyond hearing, reaching into the depths of feeling (where those of us who care, use ear plugs to go deeper). everyone plays. even those who don't, play. and love for sound, need for expression, late night conversations that almost capture the meaning of life then drip through your fingers as the sun rises, shooting purle, yellow and orange through the storm clouds that kept everyone at the show, never daring the thunder and lightening that is brought on by all the noise, yes noise, organized and flowing through some channels that end of up being people. we have been honored to know some amazing people, who cease to be people on stage, like we cease to be on stage, then its just sound and experience- everyone having their own which is in part to the collective, the blanket, clouds blowing storms away, and the heavy humidity of the daylight returns to rush us onto the next night, the next venue, the others finding their own way through this tangled mess of music and life.
Posted by Controllar at 18:39

I'm so glad you surfaced, and that write-up by "Plugged in" is terrific. I was a little confused by the term "laptop jock", thinking maybe it was something like lapdancing, but I finally made the computer connection. It sounds like you're having a great experience!